Oh those magnificent days of the 1990s.

Those days when everything seemed possible, and all those locked systems that were just waiting on the shell prompt, longing for someone to login.

Wanted or not, that cursor bleeped and bleeped, as if it were giving you a wink so that you make your move. It’s your turn.

Brute force, social engineering, key-loggers, and backdoor exploits, what wouldn’t you do to get inside and have a peak?

Those days, 2600 was a magazine that often released papers on hacker culture and technology, but it was more than that, or at least it seemed that me and my cyberspace friends have made more of it. It became a shared common ground on our digital medium to share ideas, and to challenge each other.

I’m bringing this topic because security today is much more important than it was before. I believe that in the past we were somewhat naive and hungry for knowledge, but hackers, the good ones, did not have any malicious intent.

The last couple of years have been a stormy weather for software engineers and security researchers having to deal with major security flaws found in popular platforms such as Java, Flash, SSL libraries, Linux’s GHOST vulnerability, Shellshock and not to mention widely adopted mobile and web applications that have been compromised.

If you take one thing from this post, let it be that you are more aware of security implications in the software you create. Either that, or transfer the risk to a security team that can be responsible for this.

P.S.
I may, or may not, have shared from personal experience or knowledge.

Also, I invite you to read my newly published book Essential Node.js Security 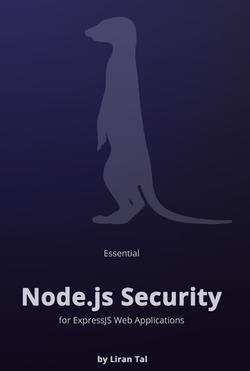